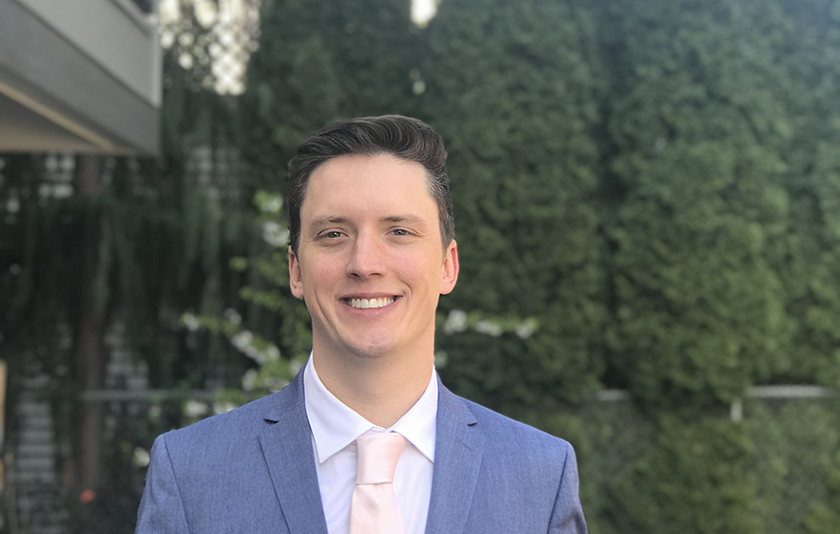 A graduate’s bright future in law began with broadcast journalism

Bruce Garrett JD’21 recently found himself in an enviable position: he never had an interview for his new job at Portland’s largest employment law firm.

This is a remarkable new start for a law student who started out as a broadcast journalist and spent nearly a decade working for the federal government.

Timing played a role. By the time he entered Willamette University College of Law, he was 33 years old. After exploring a few different careers, he had reached a point where he was hungry for something he was passionate about, and his new motivation successfully shaped his college journey.

â€œI found the process not only extremely interesting or fascinating, but it was intoxicating,â€ he said. â€œLearning how the law works has been a life changing experience. ”

A start in the public service

Captivated by the idea of â€‹â€‹a career in the public service, Garrett first considered broadcast journalism, finding work at radio stations while studying at university in his home state of Washington.

The odds of success didn’t seem great – “Like moving to Hollywood and trying to be an actor,” he said – so in 2009 he changed jobs in the Seattle area with the Social Security Administration, the one of the only employers to hire in the Great Recession.

Garrett spent nine years there, going from taking phone calls on an 800 number to acting as a disability adjudicator, helping people navigate the complex claims system. He really liked the job, but didn’t like bureaucracy and felt his mission was insufficient.

â€œAs a person who wanted to make changes and have a meaningful impact on the world, I was limited,â€ he said. â€œIt’s hard to do if you’re just a little cog in a big wheel. ”

Willamette Law’s location in the Pacific Northwest and its proximity to the State Capitol gave him access to opportunities he might not otherwise have had. â€œBeing in Salem and around the Department of Justice and the Supreme Court is something you can’t create anywhere else,â€ he said.

His internship at the Oregon Supreme Court is a prime example of its benefits. After completing a law internship in Washington State in his first year, he began a judicial internship under the direction of Judge Adrienne Nelson, reviewing appeals court briefs and writing memos. He only heard about it after a professional event introduced him to Judge Meagen Flynn, who encouraged him to apply, he said.

By the end of Garrett’s first year, not only did he feel confident about continuing his career in labor and employment law, but he had already secured a future summer position with Barran Liebman.

But he had planned for nothing more than a briefing interview when Law’s employment office first put him in touch with Traci Ray, the firm’s executive director.

After an occasional visit, he applied and then landed an unannounced summer associate position, spending the following summer drafting memoranda, conducting research, and supporting lawyers with content development and training. The courses Garrett had taken with his mentor and employment law specialist Professor Keith Cunningham-Parmeter proved to be helpful – the content was so relevant to legal work that Garrett frequently referred to the notes he had taken for get back to level.

â€œCunningham-Parmeter has a lot of material in his classes, a lot of rules, and that was the kind of depth I needed to help me during my summer job,â€ he said.

Afterward, Garrett kept in touch with Barran Liebman, stopped by the office, and even attended their annual conference. He wanted to stay on their radar, so he got involved in as much activity as possible.

Garrett founded the Labor and Employment Law Association, a student organization that put him in touch with several attorneys in the field, and became a rating and commentary editor who reviewed submissions from students for the Willamette Law Review. He has also been a member of the board of directors of Moot Court, a member of the COVID-19 reopening task force, and a student ambassador who helped students navigate the early stages of law school, among other activities.

â€œI think you have to create opportunities for yourself to really stand out,â€ he said.

His personal initiative paid off. In July 2020, Barran Liebman offered him a job with no maintenance.

Garrett is happy to have applied to law school a little later in his life. He has learned a lot about himself in the years he has spent exploring other careers, and he would not have been mature enough to tackle them like he does now, he said. .

â€œFor a long time, law school was a pipe dream, and when it finally came into being, it was pretty special,â€ he said. â€œI’ve finally found something that’s perfect for me.