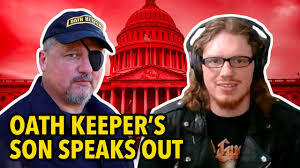 With thanks to @CharlesII for the warning, Dakota Vonn Adams nee Stewart appeared on the Tony Michaels podcast in early June:

On the fragility of Stewart Rhodes:

“Anyone doing any sort of Oath Keepers thing always had to travel in a convoy because that was a way for them to be in charge of something.”

“Stewart would relish the attention, I think, of being in Trump’s inner and close circle. He basically wanted to position himself as far away from personal harm as possible in his overarching fantasy…”

On the grounds of Stewart Rhodes:

According to Dakota, the Oath Keepers’ original 2016 pre-election plan – based on a vague anti-authority principle – was to be a ‘check and balance’ on Trump if he won. However, Stewart’s self-interest and paranoia over being arrested by a Democratic administration for his role at the Bundy ranch made him a soft touch when approached by the Trump people.

There are a whole bunch more here to explore. Dakota is as engaging and articulate in person as it is in print. I hope it stays in the public eye.

A link to the original diary of Dakota Adams: