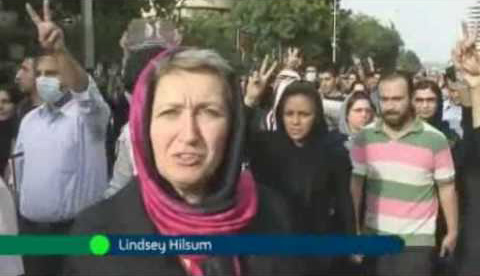 The award, hosted by the British Journalism Review and now in its third year, is named after renowned foreign correspondent Charles Wheeler, who died in 2008.

It was presented last night by his widow, Lady Wheeler, at the University of Westminster.

Hilsum started his career working with NGOs in Central America and Africa, before joining Channel 4 News in 1996.

She has since reported from Belgrade in 1999 when NATO bombed Serbia, from Baghdad during the 2003 US invasion, and covered the assault on Fallujah in November 2004. She also reported on Africa and the Middle East and was the Channel 4 News China correspondent between 2006 and 2008.

This year, she has reported on the uprisings in Egypt and Libya.

The judges hailed her work as “storytelling at its best”.

â€œIt was a masterclass on stimulating and provocative journalism. His stories gave voice to vulnerable people and exposed the wrongs caused by political excesses and official corruption. His work reinforces the notion of journalism as a force for progressive change.

Hilsum said last night that Wheeler was his “role model and hero”.

â€œI have always aspired to report in its tradition, and that is why I am overwhelmed and honored to receive this award.

“Charles once told me how much he loved our foreign reporting on Channel 4 News, so I also think it’s recognition of our efforts on Channel 4 News to report foreign news in a serious way but not solemn, as he did. “

In May, Hilsum was named Global Journalist of the Year for her reporting work on Gaza, Afghanistan, Iraq and the Democratic Republic of the Congo.

In an all-female list, she beat the competition for the One World Award from Jill McGivering of the BBC World Service and Kathrin Hille of the Financial Times.

If you like our news and feature articles, you can sign up to receive our free daily newsletter (Monday to Friday) (compatible with mobile devices).