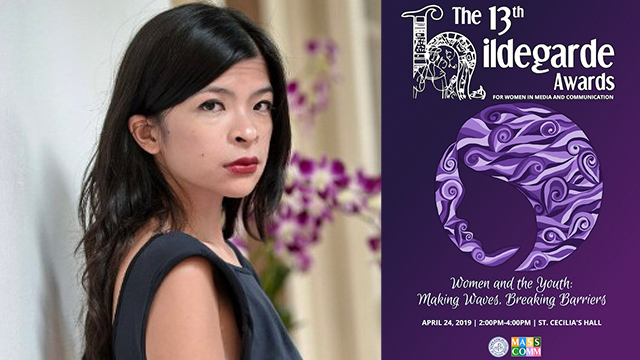 MANILA, Philippines – Rappler journalist Patricia Evangelista won the award in the broadcast journalist category of the 13th Hildegard Awards for Women in Media and Communication.

Evangelista is one of 8 recipients of this year’s Hildegard Awards from St Scholastica’s College, Manila.

â€œThis year’s theme recognizes women media practitioners who have served and led the way in improving the well-being of young people. As such, the awards ceremony is aptly titled ‘Women and Youth: Making Waves and Breaking Barriers,’ St Scholastica’s College said in a press release announcing the winners on Tuesday 26 March.

The awards ceremony will take place on April 24.

Evangelista had previously won awards in journalism. In 2014, she won the Agence France-Presse Kate Webb Award for her compelling reporting on conflicts and disasters in the Philippines.

She won the SOPA Prize 2017 for editorial excellence in feature film writing for his article Rappler, “In the name of the Father. “With Carlo Gabuco, Evangelista won first prize in the English Multimedia category at the Human Rights Press Prize in 2017, for the series “Impunity” by Rappler, which tackle drug-related murders in the Philippines. (READ: Where the war on drugs began)

The other winners in the individual category are:

The winners in the institutional awards category are:

The Hildegarde Awards “were envisioned as a means by which the ways in which women make media can be documented over time so that these best practices can serve as models and be replicated by future media practitioners.” It takes its name from the 12th century Benedictine Saint Hildegarde von Bingen. – Rappler.com