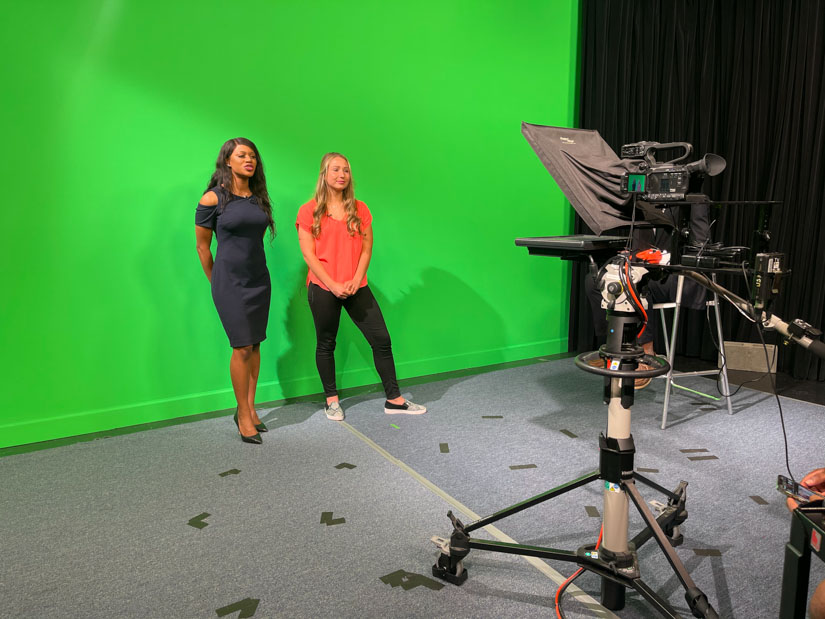 Mackenzie Hamilton, a recent graduate of the University of Southern Mississippi (USM) School of Communication, has won eighth place in the prestigious Hearst Journalism Awards program in the 2021-22 Television Features competition.

Founded in 1960, the Hearst Journalism Awards, also known as the “Pulitzer Prize for Collegiate Journalism,” provide scholarships for outstanding performance in college-level journalism and are fully funded and administered by the William Randolph Hearst Foundation. This is the first time that USM has made the Top 10.

“I consider Hearst’s competition to be the best in the country because it makes no distinction between school size, geography or anything else. The goal is to honor the best college journalism in the country. That’s it. We have always known that our students can stand next to anyone in the country and more than defend themselves. This honor for Hamilton and his mentor, Dr. Lindsey Conlin Maxwell, is further proof of that. We are extremely proud of both of them,” said Dr. Edgar Simpson, director of the School of Communication.

Participation in the awards is open to undergraduate journalism students currently enrolled at universities accredited by the Accreditation Council for Education in Journalism and Mass Communications (ACEJMC). Applicants must be actively involved in campus media and must have published articles, photographs, or produced newscasts or multimedia pieces that may be submitted in the Writing, Photojournalism, Broadcast Journalism, and/or multimedia.

“Congratulations are due to Hamilton for her work on the stories she wrote and produced. I’m so proud to have had her as a student and advisor, and I can’t wait to see what the future holds for her,” said Dr. Maxwell, Senior Broadcast Professor and Advisor.

A native of Prosper, Texas, and graduating from USM in 2021, Hamilton earned a BA in journalism with a major in broadcast journalism. Most of her stories in class were about sports, her honors thesis topic was sports reporting, and she worked with Southern Miss Athletics to produce a weekly show called “Season Pass.”

His entry into the contest was judged as a whole and included stories from: Patrick Stewart, recently retired Assistant AD of Equipment Operations; Joye Lee-McNelis, head coach of the women’s basketball team; and the Mississippi Raiders indoor football team.

“I am extremely honored that the School of Communication has entered my work in this prestigious competition and I am delighted to represent USM in the top ten,” said Hamilton.

As for the influences that impacted his professional development at USM, Hamilton adds: “Dr. Maxwell had a significant impact on me during my time at USM. She was my supervisor for four years, as well as my thesis supervisor and professor for two years. By getting involved with the Student Media Center, I also learned a lot from Chuck Cook and Dr. Wilbur Martin. Also, Dr. Simpson’s passion for journalism is so contagious and I am so happy to have been able to experience his leadership.

Hamilton’s passion for storytelling is also contagious. You can grasp his ability to bring powerful stories to life, sharing more about his contest entries.

“During my senior year at USM, I was fortunate enough to launch a weekly sports feature, ‘Season Pass’, which covered Southern Miss Athletics. I knew I wanted my first feature film to be about Patrick Stewart , who has since retired. I have always been fascinated by his work and wanted to learn more about his 25 years of service to the athletes and staff of Southern Miss,” said Hamilton.

“Later that spring, after hearing the news of Joye Lee-McNelis’ cancer diagnosis, I followed her team’s season very closely. I was captivated by his perseverance as well as his generosity. After the women’s basketball season ended, I had the pleasure of interviewing Coach McNelis to help tell her story of determination, as well as to raise awareness for the Patient Navigation Program, an initiative with Forrest General to raise awareness and remove barriers to care in our community. .”

“Southern Miss Athletics has provided me with many experiences to grow as a sports journalist and I will always be grateful for their willingness to help me bring so many different ideas to life,” she added.

“Therefore, my biggest advice to current students is to take advantage of the school’s receptivity to student media. Don’t sit back and wait for an opportunity to present itself, instead go out and create that opportunity for yourself. Start a podcast, radio show, sports report, talk show, etc. The best way to grow is to practice.

Hamilton is currently pursuing an MBA at Auburn University and works as a graduate assistant for War Eagle Productions, the video department of Auburn Athletics, where she continues to soar. Over the past semester, she’s had the opportunity to report on the Auburn Football Review TV show, host a tailgate segment during Auburn football games, and serve as an analyst on a few TV shows. Auburn football.

“While we never do anything just to win awards, I think recognition like this helps tell our story to future students: USM is a good choice to launch your career,” said Dr. Simpsons.

Learn more about the School of Communication’s journalism program.

EWS Podcast Episode 169: Our Most Anticipated Games of 2022