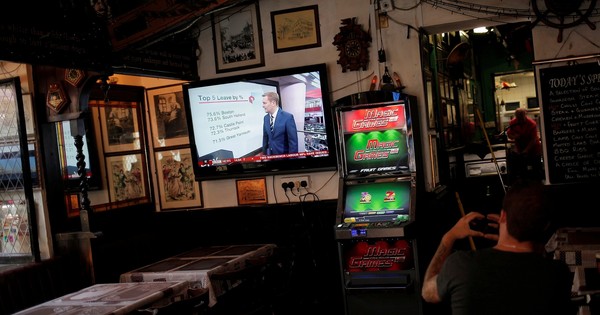 The Brexit vote also has lessons for broadcast journalism

It was almost a masterclass in broadcast journalism to watch news anchors on CNN and the BBC in the run-up to the Brexit announcement. It’s always fun to watch two-anchor shows and imagine what’s going on behind the scenes. This is usually done seamlessly on international channels, or at least any gaffes – a danger of any live broadcast – are very well handled.

This time I thought there were telltale signs of inter-anchor nerfs, when Richard Quest had a few too many lines on Hala Gorani, though that was quickly made up for by her doing a few- one of the last pitches at the breaks.

Following the race until the announced result, I switched to the BBC. I found it a bit odd that the co-presenter was mostly on her laptop, while the older male presenter took care of the discussion. (At least while I was watching.)

Of course, his questions were sharp as a point. He asked one of his guests who was in the #Leave camp, if a survey indicating there could be a split based on education – educated people mostly voting #Remain – put his panelist, a well-educated, uncomfortable guy. The guest handled this with aplomb and admitted to being something of an anomaly. Another panelist highlighted how bitter things have become and how everyone should do their part to heal some of these divisions that have openly and publicly torn the social fabric there.

We will soon see if this translates into reality. Which brings me to my favorite line, and one our exit interviewers and pre-poll analysts have probably learned too: “We’ll just have to wait and see.” This is from anchors more than once, not to mention analysts who were asked to extrapolate their findings even as the numbers kept coming in.

Sure, we’ve now waited and seen, but speaking of this moment, as a viewer? It was big news handled calmly, and one of those times when you actually needed to watch the TV news rather than rely on social media.

Brexit in the Indian media

I’m not going to comment on how Indian channels would have handled breaking #Brexit news if it happened here, because someone already did it on Twitter, using the phrase ‘breathless lives’ , if my memory is good.

In fact, maybe just an anecdote aside.

The night before, the BBC had pounced on Anil Kapoor in an interview which I caught the end of. In Madrid for the IIFA awards, the Bollywood star was asked about the Salman Khan controversy. Kapoor said something about knowing Khan’s intentions, although he acknowledged that “the way Khan was talking was wrong”. But Kapoor basically said, look at his dad Salim Khan apologized, ‘it just goes on and on, let’s enjoy the awards show’.

To which the anchor lobbed back, tone somewhat amused by the father’s apology, asking, shouldn’t Khan himself apologize? They concluded with Kapoor saying, “Why not, it’s his prerogative, I’m sure he will.”

What a study on the other hand: the day before a vote like the referendum on the EU, I doubt that an Indian news channel will focus on anything else.

Anyway, it was a good break from the fast news I was absorbing just before, on Aaj Tak Shathak Aaj Tak. This may be the first time I’ve heard someone speak faster than me on the air! The anchor kept up a fast pace of news, and oddly the main box had the video, while in a box in the corner, following the fast cuts and dramatic music admirably. The only downside was that the video didn’t earn its place, with several tracks repeated over and over.

A clock on the side ticked us off. My attention wavered at 9:48 minutes remaining, though I had lost track of how long I had been watching. The take away key? It was now 9 p.m. and I had probably heard most of the big news.

I took to ABP News to find things much calmer. Including on-air announcements. While I still find it odd to see ads in the ticker space, where you’re used to seeing news flashes, it’s a huge improvement over the ads splashed all around news boxes on Aaj Tak, where the headlines are basically in a giant jacket ad.

ABP News was on the front page, the Nuclear Suppliers Group meeting. The reporter made a nice donut, which led to him connecting to his own package with an introduction, after which his report was aired, then back to the reporter for a quick conclusion. The package itself was a solid explainer, listing four reasons why the NSG encounter matters to India. While the repetition of visuals throughout the story was a drag here too, overall there was a clean visual feel. We returned to the anchor, who quickly launched his own interview earlier today, pushing the story forward.

There is hope for this news story, after all.

Amrita Tripathi is an author and the recovery of a news junkie. She previously worked for CNN-IBN and The Indian Express. Sometimes she may have one or more familiarity with the mentioned newscasters.